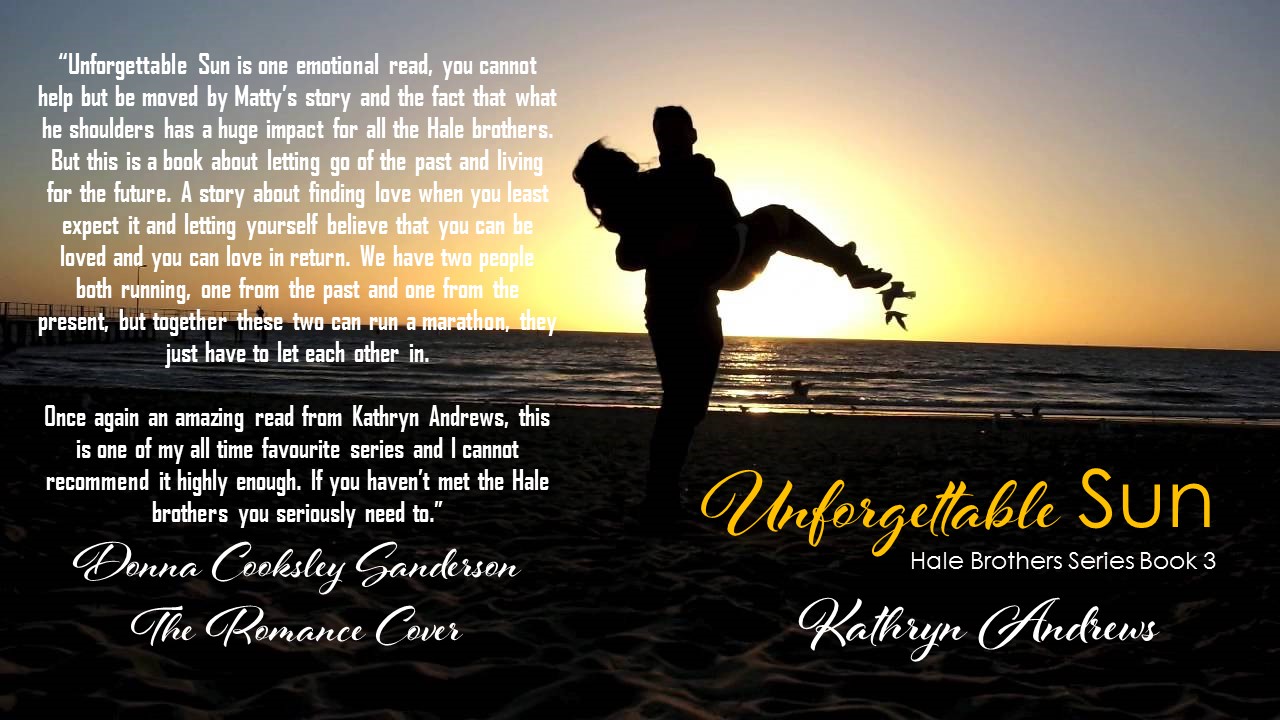 This review comes from Donna at The Romance Cover. I love it… xo

“My heart was breaking because no one ever chose me. My life was and is a ground hog’s day of loneliness.”

To say that I have loved this series would be a severe understatement, I love it when I take a chance on a new author and they deliver. When I read the first book in this series I fell in love with Kathryn Andrews’ writing and three books later, I am still in love. All of these books have been emotional reads but I always knew that Matty’s book was going to be hard. Drew’s book killed me, Beau’s book damn near destroyed me and Matty’s is no different.

Matty Hale was always the quiet one, he hardly spoke, kept himself hidden and away from everybody. He had an incredible bond with his brother Beau and he would be the only one that Matty would open up for. I often wondered why Matty was the way he was, there had to be more to it than met the eye and knowing what kind of life Drew and Beau had endured you just knew that it wasn’t going to be pretty.

Abuse does not have to be physical, I think that mental abuse is often worse as the long term effects can be permanent and far more damaging and what Matty went through at the hands of his father was inexcusable. The head of the Hale family has been on my hit list for two books already and my opinion of him hasn’t changed in this book, I am just glad that he is not in their life anymore and his reign of torture is finally over for all of them.

Matty Hale, the young man that carries a wealth of burdens on his shoulders, family secrets that eat away at him daily and that are so bad they give him constant nightmares. A child having done and seen things no child should ever be exposed to all at the hands of a man who should have had his best interests at heart, a man who should have loved and nurtured him but a man who in fact used him as a means to an end. He was the bastard child, a result of an affair and something that his “dad” would never let him forget.

Matty had his escape mechanisms and I am so glad that he found the one friendship he did, a couple that took him under their wing and had a huge influence in the wonderful man that Matty was to become. While they had managed to set him on his way in life, they could do nothing for the guilt and self loathing that Matty carried.

“Every part of me inside is shattered. My soul is crying. My heart is bleeding. I was already a shell of a man before. I can’t fathom what will remain of me after this.”

However, there is a new girl in town, a girl escaping her own demons and a girl that Matty once shared a Summer with. Even though not many words were shared the fact that Matty never turned her away was a huge accomplishment in itself. Now their paths are to cross again, will she be the one to get Matty to open up and realise that what he shoulders is not his fault, will Matty be able to finally forgive and forget and live the life that he was destined to?

Elle Summers is a super model with a multitude of problems, none more so than a stalker that is invading her thoughts and property at any given opportunity and an overbearing mother that is using her daughter to climb the social ladders and uses her daughter for fame and fortune under the guise of being her manager. When the stalker situation reaches a scary head, Elle scurries away to the only place she had ever felt safe a place where she hoped that no-one would ever find her, she goes to her Aunts on the Island.

“…there is only one way to be loved, truly loved, and that’s unconditionally…you are under my skin, in every breath that I take and permanently branded on my heart…I want to be bear you. I burn for you…”

Unforgettable Sun is one emotional read, you cannot help but be moved by Matty’s story and the fact that what he shoulders has a huge impact for all the Hale brothers. But this is a book about letting go of the past and living for the future. A story about finding love when you least expect it and letting yourself believe that you can be loved and you can love in return. We have two people both running, one from the past and one from the present, but together these two can run a marathon, they just have to let each other in.

“There are no do-overs in life. You get one chance and that’s it…it’s time to bury the ghosts and follow the sun.”

This was a fantastic read, one that I couldn’t put down. Once again another Hale brother has left me emotionally distraught but also with that feeling of hope. Children are more resilient than we think and I was so glad that Matty had the inner strength and the support of others to make him realise that he was an amazing person. He was a wonderful character who had a heart of gold and after reading his story it was hard to believe that he didn’t carry more permanent scars.

Once again an amazing read from Kathryn Andrews, this is one of my all time favourite series and I cannot recommend it highly enough. If you haven’t met the Hale brothers you seriously need to.